Accelerate Your Listening Skills With This TV Series

About three years ago I returned from an excellent trip to Guatemala that really kickstarted my Spanish abilities. The problem was, how do I build on this momentum to keep progressing?

I started an italki routine that was a huge boost, as well as used other Spanish resources to keep my progress going.

During this time, I was looking for TV shows and movies that would develop my listening skills and comprehension. Unfortunately, most of what's out there has problems for beginners or barely intermediate speakers: 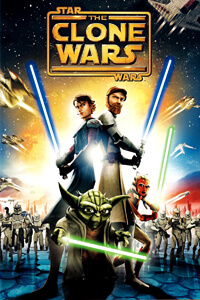 Fortunately, I found a program that solved all of these problems for me! It's called Star Wars: The Clone Wars, or, in Spanish, Star Wars: La Guerra de los Clones.

Now, to be clear, this program was originally an English-language program, so the Spanish-track is a dub. But Lucasfilm, who made it, is owned by Disney, and Disney makes excellent dubs. Consistent voice actors are used for each character, the recording is excellent, and I could not notice that the lips were actually saying different words.

There are six seasons available, so plenty of viewing time. There is a lot of action, so even when you don't know what's being said, you can follow along. And, to top it off, it's actually a good show. The writing is top-notch, and the animation is high-quality. It gets particularly good (and dark) around Season 3.

I watched it through twice, once with Spanish subtitles, and again with no subtitles.

My favorite thing about this show for learning, though, was that the Spanish subtitles exactly match the Spanish being spoken, which is incredibly rare to find, for some reason.

I know Star Wars isn't for everyone, but I would suggest seriously giving it a go, if you've watched Extr@ and other YouTube programs and are looking for a next level that will challenge you without frustrating you too much. I watched the entire series on Netflix.